The statue depicts Ripken saluting the cheering crowd of fans at Oriole Park at Camden Yards on the night of his monumental achievement. 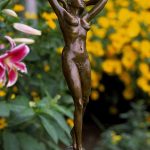